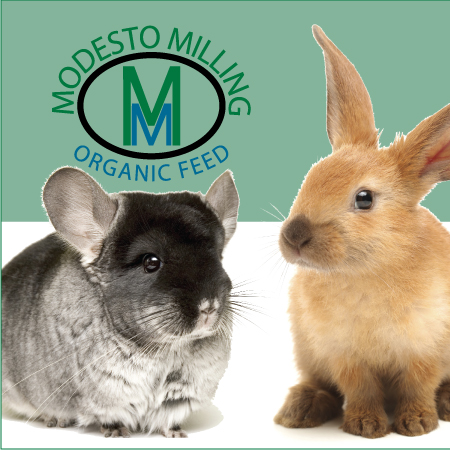 Rabbits and chinchillas are popular among Modesto Milling’s customers. Whether they are raised for pets, meat, fur or for breeding, feed is critical to keeping these furry folks happy, healthy and productive.

One of the recent changes we made to the feed was adding a new alfalfa vendor from Idaho. Alfalfa is about 60% of the feed formulation, so it is an extremely important ingredient in the mix. Alfalfa will average 8% to 10% ash, but we have seen other vendors with ash content in the 18-20% range. Ash (or dirt) adds no nutrients and in high levels can affect the smell and taste of the alfalfa and the feed. Small animals like rabbits and chinchillas are particularly sensitive to smells, and if feed doesn’t smell right, they won’t eat as much. We also chose the new vendor because the alfalfa has a very consistent protein and fiber profile on the tests we performed.

We have increased the herb and oil package in the rabbit formula by 70% this year, too. This further improves the palatability and health benefits of the rabbit feed.

An increasing number of chinchilla breeders and owners are using the rabbit feed. They tell us they appreciate the growth rate, weight gain, easier breeding, decreased death loss and darker fur and shinier coats they see when using Modesto Milling versus other, often much larger, brands. All of these benefits are even more important to people who are producing show animals or breeding pairs.

Speaking of breeding and shows, Modesto Milling is sponsoring and participating in the Empress Chinchilla National Show in Ventura, February 27 & 28, 2016. Stop by and see us if you are in the area.