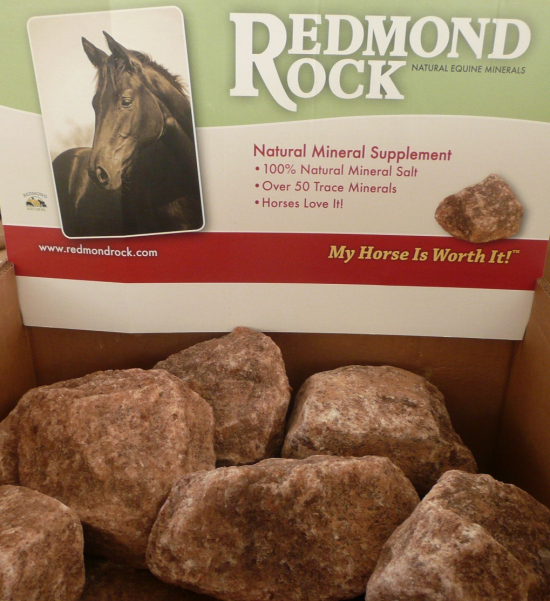 Modesto Milling has a longstanding relationship with Redmond Naturals. Redmond provides naturally mined salt and clay products that are incorporated into many of Modesto Milling’s feed formulations across the species spectrum. The reasons are numerous. Let’s start by saying not all salt is created equally; not from the perspectives of taste, trace mineral content or refinement processes.

Redmond’s clay and salt products that make their ways into Modesto Milling’s feeds are mined from one spot on the earth (in Utah), because that deposit area has a unique balance of sodium, chloride and more than 60 trace elements that mimics the concentration in our blood serum. This not only keeps bodies in better balance, it aids in ingestion and absorption and reduces the cost and processing required to artificially emulate what occurs naturally in our bodies and Redmond’s mines.

Salt mined from other sources around the world may not start with the trace elements inherent in Redmond’s mines, but some of the trace elements they do possess are further diminished in the refining process. Commercial refining processes may introduce anti-caking, free flowing, or conditioning agents, which may include sodium ferrocyanide, ammonium citrate, and aluminum silicate. Not only do these elements provide no benefits for human, animal or poultry bodies, the lack of natural trace elements extracted in the refining process may cause a leaching effect, which will deplete minerals from the salt consumers’ bodies. Redmond’s market-readiness process, on the other hand, consists of…grinding.

The commercial refinement process of most salts changes more than just the mineral content of the salt in question. It also tends to change the taste and color. Redmond’s products have a sweeter taste and a rose color, which are both very different than what you would expect from table salt or the products used in competitive feeds.

Speaking of table salt, Modesto Milling typically uses Redmond Salt in its feed that is ground even finer than table salt. So, not only does the sweeter taste make the salt more palatable for the animal or bird, the size means the granules can be spread more evenly across the batch of feed than would be possible if the crystals were larger. This is particularly important in applications such as chick starter where the need for sodium is high, so you want to make sure it is present in as many morsels of feed as possible. Larger granules make this more difficult.

Sometimes ground salt is not the best use in an agricultural environment. Salt licks for horses, goats, sheep, rabbits and other critters come to mind as a situation when rocks might be better suited to the application. An interesting attribute of the Redmond Rocks is that they don’t tend to melt in the rain the way most salt licks do. So the benefits of the trace minerals actually benefit the intended animals as opposed to the ground under them as they dissolve.

Unique ingredients in unique feed formulations: It is what you would expect from Modesto Milling, right?