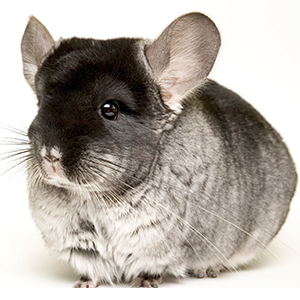 We don’t normally post two months in a row about the same animal species or group of species. But, since last month’s post about Chris Wagner’s family heritage in feed formulations and his grandfather’s reputation for chinchilla feeds, we have decided to announce Modesto Milling’s newest rabbit and chinchilla feed formulation changes.

We have continued to work closely with chinchilla breeders who wanted a bit higher fat and energy content in the feeds to meet growth, health and breeding goals. The result has been a slight decrease in the percentage of alfalfa used in the feed mix and an increase in oats, flaxseed and black oil sunflower seeds, plus the addition of coconut flour.

The extra oats help with growth, but the other ingredients increase fat content which provides more fur density, darkens the fur color and boosts energy levels. Other benefits we have heard from breeders include larger litters (with enough milk production to keep up with the greater demand) and it being easier to maintain the mama chinchillas post-natal body condition. (**Optional: Sorry, we don’t make feeds for mama humans trying to maintain post-natal body condition.)

We have polled rabbit breeders who have seen similar outcomes with their animals and have also mentioned that the rabbits’ eyes look sharper, which the breeders see as another sign of improved health.

The main differentiator for this feed, when being compared to formulas produced by competitors, is that it continues to be made with no corn, soybean meal & oil or molasses, which our breeders tend to want to avoid.

The feed is available in 25 and 50 lbs. bags, pallets and totes. You can learn more at http://modestomilling.com/rabbit.html